In Remembrance of William “Roger” Minnis 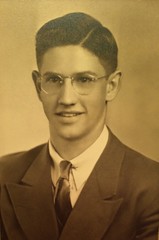 Grandpa Roger, or his CB name of “The Blacksmith”, could make anything out of metal. For example, bale racks for carrying eight round bales at a time or hay rake dollies that could connect multiple rakes together. Normally, we could hook three together but when dry times prevailed we even connected four. Another special piece of equipment he created was what he called the “hootenanny”. It was a cantankerous electric machine that had two transmissions hooked together. The driving end was connected to a v-belt pulley powered by an electric motor. It had two shifters and PTO shaft coming out of the other end that would connect to the crank on a silo-unloader. Looking back it really wasn't very safe at all, but did accomplish quickly raising the unloader prior to filling the silo. You could always rely on Grandpa having a sharp knife. He had sharpening stones in his chopper tractor so while waiting for an empty wagon to arrive while chopping corn or hay he'd be busy sharpening one of his many pocket knives.

Grandpa always had a helping hand. I can remember him bringing his loader tractor or snow blower out to clear the roads for the bus or the times he helped the REC get to broken power lines after storms. A few times we'd even have to make an emergency call to Grandpa for him to bring up his gun to take care of a coon in the willow tree near our house or coons in the old stone school house across the road. He was also involved with the Riceville Cemetery and helped put up the 100s of flags for Memorial Day. He loved his David Church family and the thing I remember most is him helping hand out the brown paper bags of goodies and peanuts that He and Grandma put together for Christmas Eve services.

He not only helped out us humans, but his beloved polled Herford cattle with the late nights or early mornings calving with the first year heifers. He loved his horses and telling stories about them from what we call the “good old days”. One story I can remember was about working the field across from the house and a team of horses getting stuck in the natural spring. He had a riding horse, Trigger, that he would take out to the yard on the west side of the house every morning and bring him back down to the barn at nights. A couple times he’d hoist me up and let me ride down to the barn while he led.

One day my Father, Leland, and Grandpa attempted to get our pony, Trigger, hooked up to a two wheeled cart. Trigger was supposed to be broke so no big deal right? Well, the horse took off running across the road with my Dad in tow, holding on for dear life. They circled around with my Dad standing and pulling on the reigns as best he could trying to slow Trigger down. Fortunately, Trigger ended up going between two round hay bales and no one was hurt.

With him loving his dogs, there was one dog in particular that was easy to remember...you know how something is so unusual that you would never forget. Well, Sport was that kind of dog. He had blue eyes, mostly gray fur with splotches of brown and black. He was a cross between an Australian blue healer and something from another world. Many times he was too good of a guard dog and prevented us visiting Grandma. That alone wouldn't make it memorable, but the fact that when Grandma would create her recipe of food for it, Sport would go through quite the act. Grandpa along with all the rest of us loved watching Sport as he would start out looking at the food for a while, start circling around it, finally growling at it like the food was going to fight back; fangs and all! Many of his past dogs were trained so well that when cattle feeding time came, Grandpa would whistle and the dog would jump up and run down to the cattle yard to herd the cattle away from the bunker so Grandpa could feed them.

We had a few picnics growing up and some entailed a bonfire made up of old trees and scrap wood. One fire was so big we had to stand back about 15 feet just to roast our hot dogs. Even with a “safe” distance from the fire my cousin, Rick, had the bottom of his shoes melt from the heat. We had trips out on the loader bucket to the North end of the farm to have picnics on top of the big rock. We even got my mother on top in spite of her fear of heights.

While we remember Grandpa, I also thank my Grandma, Anita, for being his right hand through thick and thin. Her devotion is a testament to true endless love.

In parting, Grandpa always carried his “medicine” around which was either butterscotch hard candy or the Brach’s Milk Maid Royals candy. He also liked his bowl of ice cream and crackers. So, as you get ready for bed tonight, treat yourself with a bowl of ice cream in remembrance of The Blacksmith.

What a SPECIAL Rememberance! Thank you for sharing your memories, sorry we could not be at the Service. Your Grandma Anita shared this with us. Thank you!
Paul & Sheri

It might be troublesome initially however with time, you'll get used to it. Let's say, your winning goal is $500, when you attain that quantity you should to} cash out the money. You know, generally a streak is a streak, and it does not imply it's going to repeat again. Slots are an excellent type of leisure, and should you observe all of this advice find a way to|you probably can} study to play smarter and have larger payouts. Your guess amount must be just a small portion of your bankroll. If you hit your restrict find a way to|you probably can} turn to free play games and 카지노 사이트 still have enjoyable with out jeopardizing your cash.